Two bits from the blog on the Winter Olympics:

1  Korea once imitated China in many things, including building a wall (on top of the hill in this photo): 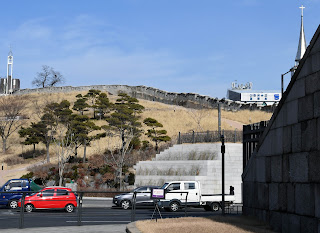 
The amazing thing to me coming from California is that they built this 120 km extension and built six new stations in less than 4 years. So far, we have been working for 3+ years on a 191 km section of high speed rail (the first such project in the US) along highway 99 in the Central Valley (as part of an eventual system running from Los Angeles to San Francisco). So far, we have no continuous track or working trains at a projected cost of $10.6 B. To be fair, most of the rise in costs has been a pile of lawsuits by opponents designed to slow down progress and increase costs until they are so high that everyone will give up. Having ridden on these types of train in Italy and Japan, I hope we will persevere.

Email ThisBlogThis!Share to TwitterShare to FacebookShare to Pinterest
Labels: Korea